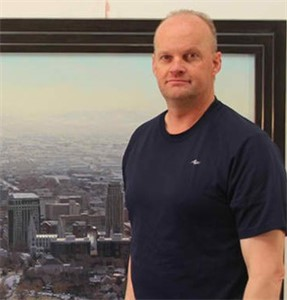 Brad Ethan Aldridge, of Provo, began taking college level art classes at the University of Arkansas while still in high school. He studied at Brigham Young University where he received his BFA while at the same time he began to exhibit his works nationally. He received his MFA from the University of Arkansas. He moved to Utah with his wife and five children. He is a painter of visionary-spiritualist images. According to Aldridge, his early days were spent as an "army brat"âliving numerous places ranging from Japan to Arkansas.

A Line as the Endless Horizon

Your current search criteria is: Artist is "Brad E. Aldridge".