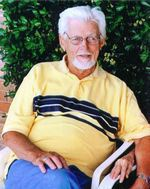 Karl Gustave Ackerman was born in Sodra Sandsjo, Sweden, on February 18, 1923. He enlisted with the Royal Swedish Navy in 1940, and it was there, while stationed in Stockholm, that he met his wife-to-be, Anna-Greta Eklund. On May 20, 1945, the two were married. Over the next eight years they had two children, Rika and Andy, and in 1953 immigrated to Ogden, Utah, where they settled down to raise their family. Anna-Greta passed away in 1994, and Ackerman eventually remarried Virginia Howell on September 17, 1995. For thirty five years, Ackerman worked as a successful real estate salesman, but his true passion was focused on his career as a pastellist and painter of formal abstractions. He passed away June 11, 2007.

The Blackbird that got into the Garden

Your current search criteria is: Artist is "Karl G. Ackerman".